Migraine headaches are the severest of all headaches. They do not have a theoretical treatment for a permanent cure. The specifications of the disease are so intense and quite different from the other types of headaches.

A tension headache lasts less than few hours whereas the migraines stay for two hours to three days at the most. The symptoms of migraine headache are also critical to get along with. Giving a brief to all the details of migraine headaches, we have come up with an unconventional solution for the problem. Pressure points for migraines would do a lot of favour in anyone’s case who is suffering from a migraine headache.

Acupressure technique gives the best natural treatment for any pain in the body. Particularly, the treatment of acupressure for migraine headache works in a great way as the nervous system is intensely attached to the life energies of the body.

The reason for the occurrence of a common headache could be mental tension, excessive exercising, and emotional imbalances. A migraine, on the other hand, falls on the complex side under which the blood vessels of the brain expand themselves in order to release certain chemicals from the fibers of the nerve which results in inflammation and severe pain. There are certain pressure points for migraines that aid in the relaxation of the pain.

Acupressure for Migraine can fight its Root causes:

Migraines do not occur in mild magnitude, they always attack in intense magnitudes. And the major cause of this pain is not yet discovered but there are particular factors that are suspected to trigger the attack. 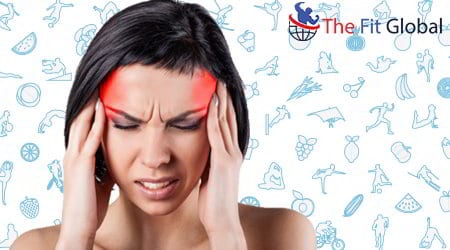 This migraine is also said as a ‘common’ migraine. The symptoms of migraine without aura include a moderate headache which gradually becomes severe and occurs without any warning. It is usually felt on only one side of the head.

Other symptoms of this kind of a migraine are confusion, nausea, blurred vision, fatigue, changes in mood as well as an increased sensitivity to sound, light, and smell. This kind of migraine attacks lasts for a period of 4 to 72 hours. They also repeat a few times in a year to a few times in a week.

The movements made during this kind of a migraine usually aggravate the pain. It is very much prone to even worsening the situation with the frequent use of symptomatic medication.

A migraine with aura is also considered as a complicated or a classic migraine. This kind of migraine includes visual disturbances as well as other neurological symptoms which appear for a period of about 10 to 60 minutes prior to an actual headache. This migraine does not last for more than an hour.

This kind of migraine leads to the failure of part or all your vision. The aura may come into occurrence without any headache and it can strike at any time of the day. The less frequent symptoms of aura are numbness, abnormal sensation, weakness of the muscle.

On one side of the body, trouble in speaking, tingling sensation in the face and the hands. Symptoms like loss of appetite, nausea, and an increased sensitivity to noise, light, and sound precede this kind of migraine.

There are certain advantages of reflexology that can be used more than effectively to treat various ailments and pains caused in the human body. Excess tension in the muscle, as well as vascular imbalance, causes various pains above the neck that can be cured effectively by the way of acupressure and reflexology. This is because the points of acupressure in this area are easily accessible and can be triggered by applying a little pressure.

The techniques of Acupressure for migraine headache can treat the most severe pains. The medication and counter medication provides relief instantly though; this relief lasts for a very short period of time.

Reflexology, on the other hand, treats the pains externally as well as internally so that one can get over it completely. This treatment serves as the most accurate migraine cures.

6 Most Important Pressure Points for Migraines and Headaches:

Migraine treatment has become widespread today as a result of reflexology and acupressure. Applying pressure at specific regions of the body helps to alleviate the pain very easily.

The pressure on these regions helps release the blocked meridians, thereby accelerating the flow of energy throughout the body.

Pressure points for migraines and other pains also help in the release of endorphins, which is a natural painkiller that is produced in the body.

The points on the face and the forehead are considered as the yang points which are full of energy which generates from the face and head and flows downwards.

1. Third eye point-  This point is situated in between your two eyebrows. It is exactly located where the bridge of the nose meets the forehead. Applying pressure in this entire region aids in improving concentration, headaches, eye strains and various ulcer pains. 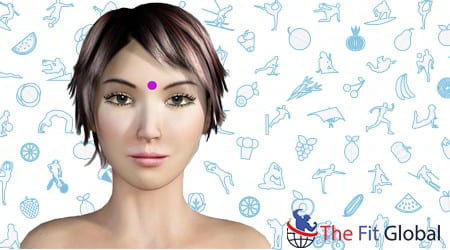 This point is considered as one of the best pressure points for migraines.

In this entire presentation on acupressure for migraine, the third-eye point does the treatment in quickest possible time. You are required to apply pressure for a duration of one minute and then move to the other point.

2. Bright Light- This point is located just below the eyebrows, in the inner corner of the eyes. Applying pressure at the mentioned points is one of the finest remedies for allergy symptoms as well as sinus headaches.

Apart from this, this pressure point also helps in improving the vision. Apply pressure for a minute religiously on both the sides.

Temple region is also considered as one of the finest pressure points for migraines as it helps to relieve the pain caused by headaches and migraine. A chain of points is located in the temple region of the body which curls around the ear starting from the very topmost point of the ear and are located at a width of just one finger from the location of the year.

All these points are considered to be working simultaneously once the pressure is applied for the most effective results on the body. These points have been numbered as point 1,2, 3, 4 and 5 so that they could be comprehended easily. The first point, point 1 is located next to the tip of the ear. The rest of the points are located in a curl around the ear. The following points are considered as the most important pressure points for migraines as well as other cures. 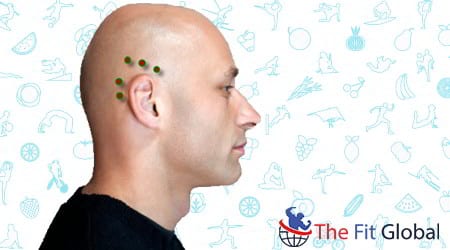 Applying pressure on the above-stated points would definitely help in relieving all the temporal headaches caused on the sides of the head as well as migraine.

[ Also Read: How to Stop Ringing in Ears ]

These facial beauty points are located on both the sides of the nostrils. They are located below the cheekbone and right below the pupil. You can easily stimulate these points. Applying mild pressure on these pressure points for migraines will soothe the pain very easily. 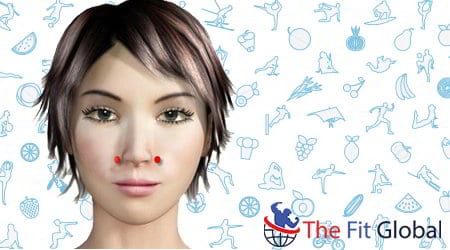 The proper stimulation of these points helps in opening up the sinuses, treating the toothaches, relieving eye fatigue as well as reducing all kinds of tension headaches and migraines.

Neck region is yet another area of the body which is considered as one of the most important pressure points for migraines as well as other severe pains.

Applying pressure on the wind pool point aids in unblocking the nasal congestion, relieving pain caused in the ears, eyes, throat, migraines and headaches. This point is one of the best pressure points for migraines treatment. 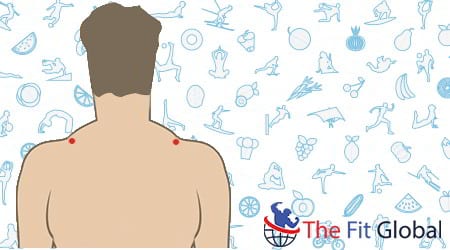 Pressure on this point also helps in relieving other ailments such as stress and anxiety, spasms including dangerous diseases like asthma as well.

3. Heaven’s Pillar- The heaven’s pillar is located at a distance of two fingers right below the base of the skull, right on the rope-like muscles that are present on both the sides of the spine. Applying pressure on the heaven’s pillar aids in the cure of ache caused at the back of the head, eyestrain, neck pains, stress, stiff neck as well as insomnia.

If you regularly stimulate the heaven’s pillar it will cure all your cough issues since it is one great cough relief remedy, and is also the best treatment for shoulder and neck pains with the same acupressure. 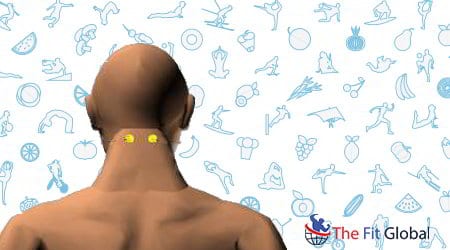 If this point is stimulated, it will relieve all kinds of eyestrains, headaches, dizziness, arthritis, irritability as well as neuromotor co-ordination.

Union Valley-  The union valley is the region which is located in between the thumb and the index region. This region is an excellent point in acupressure for migraine cure. It also treats many ailments along with headaches. 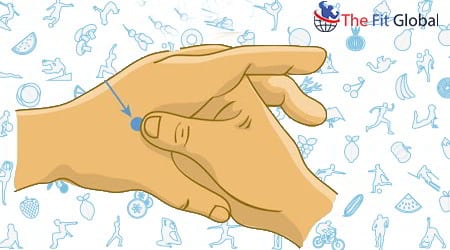 Applying pressure at the union valley in the hand region aids in the cure of the frontal headaches, toothache, backache and also helps in releasing the tension caused in the neck as well as the head. The same union valley point works well with acupressure for toothache treatment also.

Several points are also located in the foot region that happens to relieve severe aches caused in the body. Foot region has two symmetric pairs of pressure points for migraines cure which are known for their treatment of many other pains in the body.

Moving Between:  The moving between point is situated in the valley in between the big and second toe. 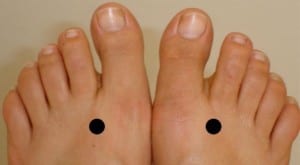 Applying pressure on this point helps in relieving all kinds of headaches, arthritis, tiredness caused in the eye and several cramps caused in the foot. This point is also known as foot rushing point.

Above Tears: This is yet another foot point. Above tears is located on the top of the foot. You will find this point an inch right above the webbing of the fourth and the fifth toes. 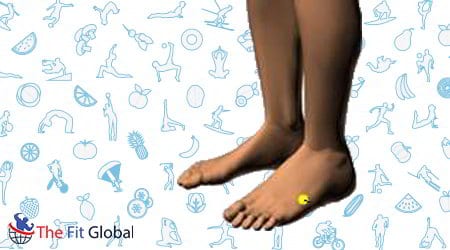 Stimulating this point will help you get rid of sciatica, hip pain, headaches, water retention arthritic pains as well as shoulder tension. Many of the above pressure points work very well with acupressure for body pains also.

There are many suggestions in the list of pressure points for the pain-relieving treatment in various parts of the body. Headaches are considered as one of the most common problems for the people today.

An unhealthy lifestyle, stress and various other regions aggravate the pain even more. Just because this problem is common, it doesn’t mean that it should be ignored. Instead of resorting to the pills and medication, one should always look forward to opting for acupressure and reflexology for the treatment of headaches and migraines.

You must, therefore, know all your reflexology zones and give acupressure as well as reflexology a chance in order to experience the difference.

The pressure points for migraines are the specific pressure points that work more effectively for all kinds of headaches. Some of the points show quick and strong results while there are many other points that take time for easing and curing the pain.

Try each of the above-stated pressure points for headaches and migraines cure in order to figure out the best one for you. After all, what’s better than curing the aches at the earliest?