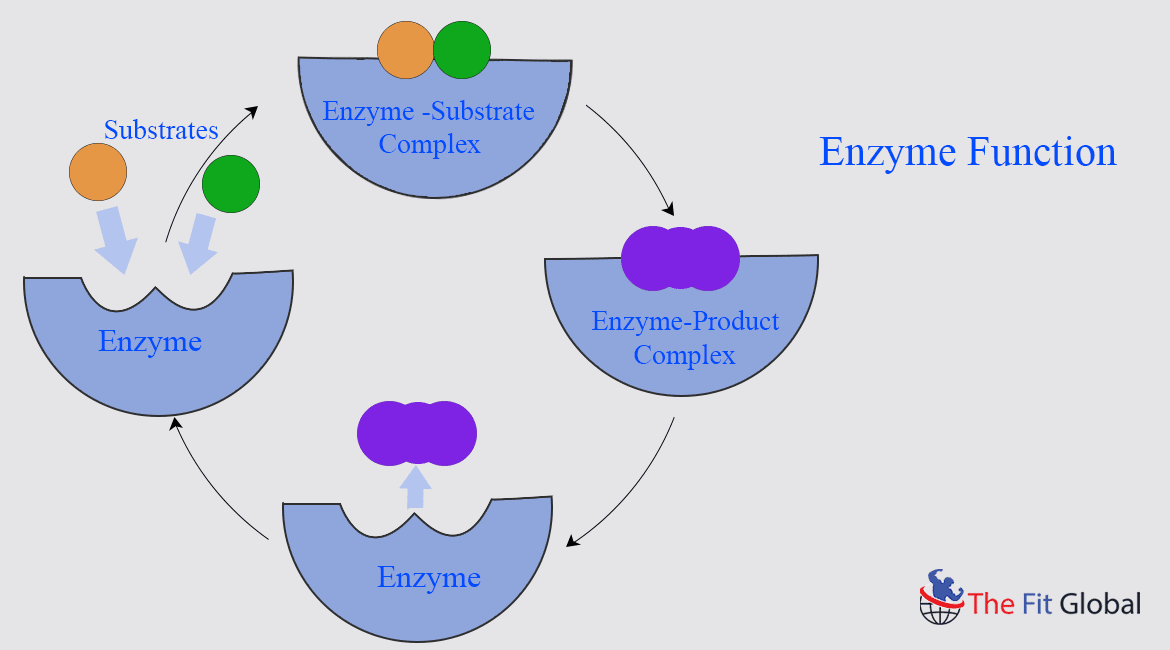 Our life is so strange. Our body is a miracle. The way we live is unconsciously determined by ourselves. The unconscious act turns conscious when the body has an attack related to any of the diseases or illnesses such as Alzheimer’s disease, the most common one. It’s because when something impacts or pressurizes the body in the negative direction, then obviously the conscious act of discipline starts in our daily life. The biological functions of the body optimize the power of the brain which in turn boosts physical health. So each and everything has an interrelation. Have you ever questioned how this interrelation of the body happens? The only catalysts present in the body will make it all happen. Enzymes function is a biological process through which the body possess enough capability to sustain and this existence found in the human beings by default!

The basic definition of enzymes will go like this “protein molecules shaped by amino acid chains.”

Whatever you take or whatever processes the internal organs undergo, enzymes show their universal brotherhood nature to carry out the processes. I don’t know whether many people get this or not but it’s an information about life that puts two conditions forth to live. The first condition is that the body has to self-replicate. I know now you’re a bit tilling to know what exactly it means. It’s a biological effect that results in the death of old cells and new cells will take their birth. Now, the new cells must be the exact replica of DNA and must be in synchronization to ensure body’s activity. So the replica of DNA nature or any other similar characteristic in the newly born blood cell defines as self-replication.

The second condition is whatever the chemical reactions happen within the body, the efficiency and selection of particular reaction responsiveness must happen to yield a perfect output and if not, the distortions will start in the internal body. We may have studied catalysis in chemistry, and our body’s chemistry also has a catalytic process and without this body can’t survive. Hence, here they come to trigger the biological functions of the body – Enzymes, specialized proteins.

The reaction of Acting Enzymes in the Body:

Being extraordinary, Enzymes function have gained the catalytic power. This power will show its flexibility greater than inorganic or synthetic catalysts. However, the substrate-contained enzymes have specificity at a higher degree and no doubt in its chemical reaction acceleration as they stand tremendous. Enzymes will involve in aqueous solutions too. To some extent, it was known what are enzymes and how exactly they have a go in the body.

An elevating point here is enzymes are a central pillar of every biological process and will conserve molecules to transform them into chemical energy. The action of catalysis by enzymes in various chemical reactions and biological processes will equate to sustaining our lives. Few diseases may impact on enzymes like B12 deficiency while the other few may get impacted due to enzymes. There’s no point that few are essential enzymes and few are not! According to the chemical and biological functions in the body, the respective enzymes will be activated to continue the further process.

Why is Enzymes Function a Catalytic Behavior?

We lack the reasons to explore ourselves more and let me give you an opportunity to explore more on enzymes function as a catalyst.

Basically, a catalyst quickens the process of a chemical reaction without self-transformation by a chemical reaction. This fact of catalyst unchanging principle differs from substrates. Enzyme substrates, in fact, are the reactors which contribute to the catalyst working. To your question of what enzymes catalyze, you have the answer now. Biochemical Reactions! The three points below define the enzymes function and their behavior in the chemical reactions.

You may have known this but I will brief it. Suppose let’s say you’re on a walk or on the go for a mile run. Before or after the run your body or physique will not change but internally blood pressure speeds up, heart beats at a faster rate, and breathe comes very fast. Here, the body is not undergoing change. Similarly, during chemical reactions, the catalysts will not participate in the reaction but maintains the whole reaction in the state of equilibrium. The type of reaction and based on the catalytic behavior of that particular reaction, the enzymes function takes place.

However, the action of catalyst on the biochemical reactions is unidirectional. But enzymes in the body boosts up the rate of chemical reaction in both forward and reverse direction without disturbing the equilibrium state.

Binding of substrates is what the enzymes will do along with chemical catalysts. Anyhow, this is for a particular time until the catalysis process happen. This is termed as Active Site.

I think I have kept you to some confusion by involving the term called chemical catalysts. Enzymes differ from these with few aspects.

Chemical catalysts work with various substrates and enzymes show their participation depending on the process.

Generally, chemically involved catalysts requires some pressure and temperature. If you observe body catalysts, they do their sincere work without any pressure/temperature.

These are protein-composed molecules and sometimes composed of RNA. Rest chemical catalysts are surfaces and/or ions.

Types of Enzymes in the Human Body:

The generous attitude of enzymes is superior and based on their trance in the biochemical reactions, there are three main types of enzymes exist in the human body.

There’s a uniqueness of each enzyme which becomes the part of any of the three mentioned. So far, the body has 75,000 enzymes and not every enzyme we should know but to some extent, we need to have an idea of about basic enzymes. Here’s the list of basic enzymes:

To name a few, these are the enzymes those will fasten the biochemical reactions in the body and enzymes function in an effective way to show their activation and in fact, few enzymes will boost the immune system by giving it more strength and power.

Through esophagus, the food enters into your stomach and some process will take place in the stomach. Yes, you got it – breaking down! The food breaks down into nutrients such that the body absorbs and utilizes these nutrients. Science named the digestive enzymes or stomach enzymes as Hydrolases. Hydrolases will conduct a reaction called hydrolysis.

In this reaction, larger molecules will be broken (without any mercy because we need energy) into smaller molecules and different types of enzymes will break down various food components. The simple drinks such as black tea and green tea, will not have any complex molecules to break and they will simply get digested.

If seen under a microscope, your body has an array of DNA copiers or genes and these are called chromosomes. Chromosomes show a genetic behavior and this genetic material is none other than DNA – deoxyribonucleic acid. In our body, cells undergo division and each cell has an expiry date. As old cells begin to degrade, new cells will take their origin. So the new cells must have exact DNA copy that you have. Enzymes function is to replicate the DNA feature onto the newly formed cells.

Involving DNA feature into the cell, copying the DNA, and finalizing the DNA in the cell are the processes which enzymes show their value in.

Energy is the ultimate source that body has to have to do any task. Blood sugar or glucose or proteins and fats are used to generate energy, sometimes the body has to take the initiative to dissolve complexity. The complexity of complex processes is called Cellular Respiration. This process completely relies on enzymes function which will generate molecules – Adenosine Triphosphate (ATP). ATP gives power to the cells. As the complexity of the food you take increases more, the breaking down of molecules will be more. This will produce more ATP molecules and hence you will gain a wonderful health to carry out regular activities.

Enzyme activity in the body and their role may have cleared your doubts. Surprisingly, it’s just a 10% what you have known till now. The importance of enzymes is not yet completed as there are many enzymes those will trigger each part of the body and may be in the later we can have a discussion on them.

Now, I have one question for you, if we have enzyme deficiency in the body, how we can solve it? There are two methods you can go: Either have supplements or go for a treatment in a severe case. Enzyme problems have an association with few medical conditions.

If I have to explain you in brief, suppose lactase – a digestive enzyme deficiency will impact your digestive system with lactose intolerance. The severity of the deficiency of enzymes leads to pancreas inflammation. The most probability chance for this type of condition is due to the inability of the digestive system to digest the foods. Often, it also comes due to malnutrition as well as sudden weight loss.

If a single enzyme function in an impaired direction, then nerve cells present in the brain and the spinal cord will be destroyed. If a child is born with such a disorder, then the child may go to a fatal condition. The best way to avoid such complex disorders or illnesses is to have enzyme supplements.

Our body plays a dramatic role when we trouble it with unwanted foods and unknown intakes. The mistake is a justice if it’s for the first time and it’s not a favor you do to the body if you do it again & again. So be careful while having something because enzyme function should not be damaged by yourself.

Whatever you have read till now is mostly focused on how do enzymes work. Hope you have understood what exactly our enzymes are and how do they participate in the biochemical reactions that occur in the body. Also, a brief on what do enzymes do zooms in the necessity of enzymes and their moral contribution towards the body.

“Body is a wonderful weapon and a beautiful asset with complexities. Never make it complex with diseases or illnesses. Be Conscious and act consciously because Enzymes function is a powerful phenomenon.”